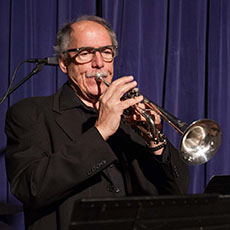 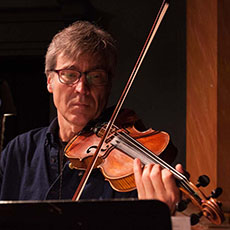 Nearly all the repertoire the Melanthium Ensemble performs is written by pianist and composer Lew Richmond. Lew has this to say about his musical compositions for Melanthium:

I began writing music for this unusual blend of instruments over three years ago, and since then have produced over fifty pieces, some for live performance and others as part of a film or video soundtrack. Although I am classically trained, I write in a variety of styles that we like to call “Chamber Fusion.” This eclectic blend includes tangos, settings of traditional Americana and spirituals, jazz-inflected tunes, and blues-inspired melodies, as well as deeply emotional classical pieces. “Anna’s Lullaby,” an audience favorite, is just a simple tune but it always resonates with listeners. I am a melodist, and melody is the core of what I create. I also have the ability to compose very quickly for a particular setting or mood, a facility that comes in handy when writing for film. People often say that my music seems unusually visual, and I do often picture a scene in writing a piece, as in “Mountains and Rivers.” Some of the music is inspired by folk tales or myth. “The Selkies Rise” is based on the legend of the half-seal, half-human spirits of Irish lore. “Mushroom Rings” and “Circle Song” were inspired by picturing elves or pixies dancing around a mushroom circle.

Aside from my original compositions, there is very little existing repertoire for our unusual combination of keyboard, trumpet, violin, string bass, and percussion. (For a specific projects, we can add other instruments or vocalists as needed).  That is one of the many ways Melanthium’s sound is distinct and unique. My fellow musicians are top-notch; I feel privileged to work and play with them, and I join them in looking forward to growing and developing this new musical adventure.

The melanthium are sprouting in the East Bay. Not the wildflower, but the Melanthium Chamber Ensemble, a group of local musicians that has created a new music genre, which they call “chamber fusion.”

This is no hasty endeavor but the combined talent of local musicians who launched the ensemble in 2013.

No matter the name, the group exudes the sound of original music.

I'm very impressed with your Music Sampler.  The music worked beautifully with the images and had me visualizing dramatic sequences that the music would augment.  Very well done!